One of the most noted features of the church is the world famous 17th Century Thamar organ. Only eight large-scale organs in total survived the English Civil War as Oliver Cromwell apparently had a dislike of their ornate style and ordered them to be destroyed. Of these, there are just three remaining Thamars. The other examples being in Gloucester Cathedral and St Nicholas's church in the hamlet of Stanford upon Avon, Northamptonshire.

The sumptuously painted pipes belong to the Thamar organ first built for our patrons, Pembroke College, by Thomas Thamar in 1674 just after the Restoration (celebrated by the hatchment on the south wall). The only other painted pipes of this style are to be found in Gloucester Cathedral and featured in the television adaptation of Joanna Trollop's novel The Choir. The organ case is one of eight survivors of Cornwall's destruction of organs. It is believed to date back to before 1630 (maybe much earlier — 1580 has been mentioned) and some of the pipework may at least pre-date the Commonwealth. If this is so we can experience something of the sound of the earlier 17th Century English organs.

In 1707 the College decided it would like a larger and more up to date organ by Father Smith for their fine Wren Chapel. So their old Thamar organ came to St. Michael's in 1708 along with its old case. It was placed on a gallery where it stayed until 1898. For a period the organ was moved about the church first to the north aisle and then into the chancel until 1970 when the gallery was recovered from the castle and reunited with the organ in its present position under the leadership of Michael Gillingham and with the aid of the Pilgrim Trust.

The organ's history contains many mysteries. One concerns the famous and historic organ builder John Byfield who worked on the organ during 1740 according to reports in the Ipswich Journal. When Hunter rebuilt the organ in 1898 he used most of most of Thamar's pipework on the great organ except for the cornet and trumpet which he replaced with a harmonic flute and gamba. The cornet went missing and the trumpet was lost. The swell incorporated at least three eighteenth century stops.

The restoration by Bishop and Son of Ipswich in 1970 was sensitive and imaginative. The Thamar organ was restored with no additions or subtractions (apart from a board for bottom C#). The cornet was rediscovered in the Rectory attic and repaired, restored and reconstructed. A very old rank of trumpet pipes was found to replace the lost set. The swell was matched up to complement the great and based on its 18th Century content. The pedal was likewise treated. The Cromorne was introduced by John Budgen of Bishops and is an excellent and versatile addition to the swell organ. A pedal reed was also added.

The organ has illustrious associations. Mendelssohn is believed to have given lessons to Caroline Attwood when he visited her elder brother George Attwood, then Rector. Mendelssohn knew George's father, Thomas Attwood (1765-1838), composer and organist of St. Paul's Cathedral and one time pupil of Mozart.

The Church welcomes visiting organists who would like to practise or give a recital. Simply contact our church wardens, Sandra Cartwright or Jeremy Schofield. And, of course, every Sunday the organ fulfils the primary purpose for which it was built — that of accompanying and enhancing the church's worship of Almighty God. 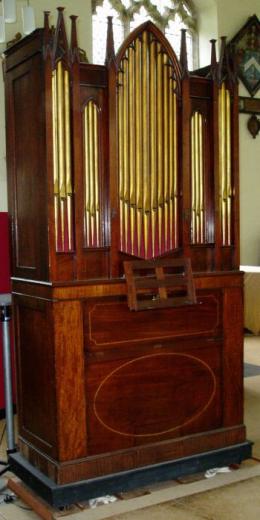 The church has another organ which is in the chancel. This is a delightful organ by William Allen of Soho Square 1797. It was brought here in 1982 from a church in Chesterfield and was dedicated during the course of the Parish Eucharist at 9.30 am on Sunday, May 30 1982. It was donated to the church by Margaret Millard’s son, Leonard John Millard, a former church-warden at St Michael’s.

The inscription on the inner panel of the case reads:

This organ, built in 1797, was rebuilt in 1982 and given in memory of Joseph Tanner 1853-1934, Barrister at Law and sometime scholar and graduate of Pembroke College, Cambridge and of his daughter Margaret Josephine Millard 1907-1980.